Your nearest Poolside store is:

Visit the store locator to find other stores » 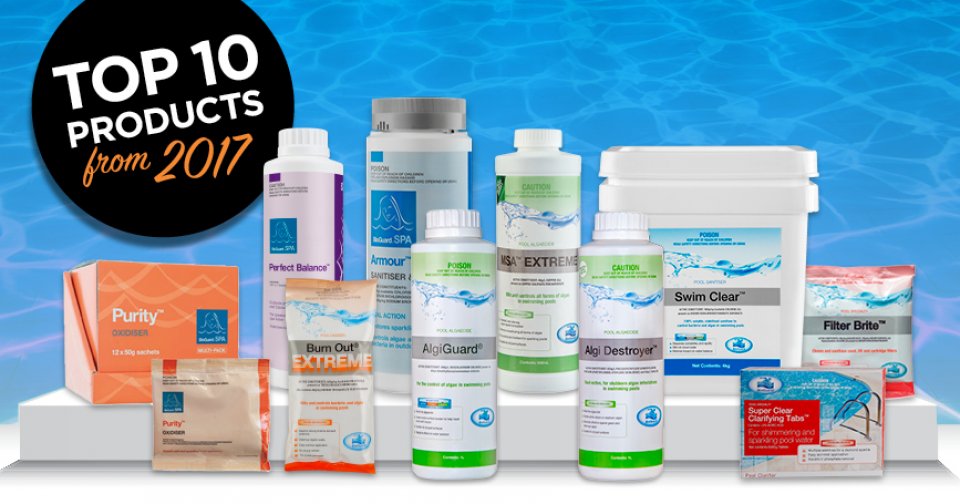 2017 was full of surprises. Donald Trump was sworn in as President of the United States, the British voted to Brexit the EU, Australia said ‘Yes’ to same-sex marriage, and – arguably the king of the pool party, Hugh Hefner – passed away.

But, more important than any of those revelations are BioGuard’s most popular products for 2017 viewed by you on our website! Number 1 might not be what you think…

Coming in at number 10 is BioGuard AlgiGuard. You’ll love this highly effective quat-based algaecide because it lowers water surface tension to repel ducks and insects, and because it prevents the growth of algae.

Swim Clear has been one of our more popular products for years. This stabilised and granular chlorine is great at both regular sanitation and for shocking your pool. It’s a real money saver!

2017 was a good year for a lot of filters around Australia and New Zealand, with BioGuard Filter Brite landing the number 8 spot in this year’s most popular pool and spa products! Filter Brite restores filter efficiency by removing scale and rust deposits. It also sanitises – lengthening the life of your filter and reducing maintenance costs.

Everyone loves a spa – especially when it’s free of chloramines and musty odours. That’s why BioGuard SPA Purity came in at number 7 – landing as the first spa product in your top 10!

There’s nothing better than a crystal clear pool, especially when it’s free from waste. Which is why BioGuard Super Clear Clarifying Tabs have landed just outside the top 5! By removing both organic and inorganic wastes, Super Clear will enhance filtration and sanitiser effectiveness while boosting water clarity.

Making its way into the top 5 and giving you a few hints about our most popular product is SPA Perfect Balance! This phosphate buffer maintains a stable pH, softens water and prevents corrosion. If you haven’t tried it – do. The water-feel is truly amazing.

Coming in at number 4, the ever-popular Algi Destroyer. By combining two active ingredients into one formula, Agi Destroyer removes stubborn algae infestations in any type of pool.

In years gone by it’s been a number one, but this year’s third place is the multifunctional Burn Out Extreme. The beauty of this product is its ability to treat pools with algae and chlorine demand problems, plus it’s a real money saver.

BioGuard MSA Extreme has landed the runner’s up prize in 2017 most popular products. As one of our patented products, MSA Extreme is a non-staining, highly concentrated copper-based algaecide powerful enough to kill all types of algae in swimming pools. Compatible with both chlorine and bromine systems, it also clarifies while increasing the hold of copper for a more effective algae control.

In 2017 spas ruled supreme! Introducing, BioGuard’s most popular product, SPA Armour! This astonishingly fast-dissolving, totally soluble and granular product can be used as a sanitiser and an oxidiser in spas; there’s no need for two products. Plus, it can be added directly to the spa! This was a popular product for 2017 as it is the perfect upgrade from lithium based spa products, which is becoming increasingly scarce. Is there any wonder why you loved it?

Save this page for later